These cottages were built in 1977 on the site of the old village shop. They were designed by Messrs Aldington and Craig and have been the recipients of several prestigious awards. The site was given to a Charitable Settlement in order to provide affordable housing for elderly residents of the village.

The five houses that were originally designed for this purpose are bungalows with two bedrooms, a bathroom, a living room and a kitchen. Each house has a small garden.

Lyde End has proved very popular over the years and it has enabled a number of people, who for one reason or another wished to move from accommodation that had become unsuitable for their needs, to relocate within the village itself. Such accommodation at affordable rents is in short supply locally and these residents might otherwise have had to leave the village completely.

The Trustees are keen to make local residents aware of Lyde End and invite interested parties to register an early interest in the possibility of relocation should any of the houses become available. In this respect they have put together the following list of the sort of criteria upon which a successful application would be based. The list is not intended to be comprehensive but purely gives an indication of the sorts of factors the Trustees would consider.

Bledlow residents needing to downsize from an existing house for reasons of health, age or affordability

If (in the context of these criteria) you would like to register an interest with the Trustees, please contact us: enquiries@carington.co.uk 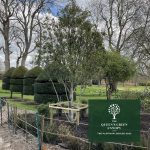 We were delighted that our Jubilee tree planting at the entrance to the Manor House Gardens – a Turner’s Oak (Quercus Turneri “Pseudoturneri”) – has been included on the Queen’s Green Canopy map.

We were delighted to welcome several members of the CoExistence Herd to the Sculpture Garden which spent the Winter and early Spring with us. They have now left us for an exhibition in the Royal Parks during the summer of 2021, but one of their number will return in the Autumn. – follow this website […]